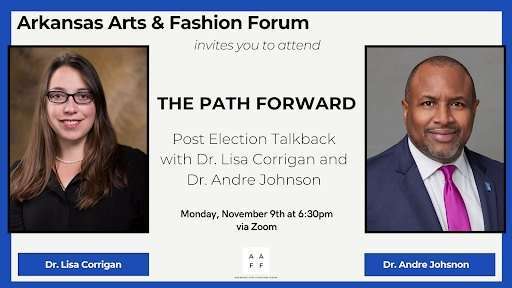 On Monday, November 9th, 2020, at 6:30 PM, Arkansas Arts & Fashion Forum will be hosting a live video conversation with Dr. Andre Johnson and Dr. Lisa Corrigan. Here they will discuss our nation’s current state and how we should move forward in our post-election world.

With political tensions reaching an all-time high in the previous week, many of us have asked the question, “where do we go from here?” While our nation stands more noticeably divided than we had previously assumed, we must start a conversation on “The Path Forward.”

"While our nation stands more noticeably divided than we had previously assumed, we must start a conversation on
'The Path Forward.'”

Dr. Lisa M. Corrigan is a Professor of Communication, Director of the Gender Studies Program, and Affiliate Faculty in both African & African American Studies and Latin American and Latino Studies in the Fulbright College of Arts and Sciences at the University of Arkansas. She is a feminist rhetorical scholar who researches and teaches in the areas of social movement studies, the Black Power and civil rights movement, prison studies, feminist studies, the Cold War, and the history of public address. Her first book, Prison Power: How Prison Influenced the Movement for Black Liberation (2016: University Press of Mississippi) won the 2017 Diamond Anniversary Book Award and the 2017 African American Communication and Culture Division Outstanding Book Award, both from the National Communication Association. Her newest book, Black Feelings: Race and Affect in the Long Sixties (2020: University Press of Mississippi) examines how the role of race is shaping public policy and how public policy shapes racial identification. She co-hosts the popular podcast, Lean Back: Critical Feminist Conversations, with Laura Weiderhaft. And she has worked in political campaigns and as a political consultant for over 25 years.

Andre E. Johnson, Ph.D. is an Associate Professor of Rhetoric and Media Studies in the Department of Communication and Film at the University of Memphis. He teaches classes in African American Public Address, Rhetoric Race and Religion, Media Studies, Interracial Communication, Rhetoric, and Popular Culture, and Hip Hop Studies. He is currently collecting and editing the works of AME Church Bishop Henry McNeal Turner under the title The Literary Archive of Henry McNeal Turner (Edwin Mellen Press). He has already published the first six volumes, and the seventh one is set for publication in 2020. Additionally, along with his academic titles, he currently serves as Senior Pastor of Gifts of Life Ministries, an inner-city church built upon the servant leadership philosophy in Memphis, Tennessee.

In addition to collecting the writings of Bishop Turner, Dr. Johnson is the co-author (with Amanda Nell Edgar) of The Struggle Over Black Lives Matter and All Lives Matter (2018) that won the 2018 National Communication Association (NCA) African American Communication and Culture Division Outstanding Book Award. He is also the author of The Forgotten Prophet: Bishop Henry McNeal Turner and the African American Prophetic Tradition (2012) that won the same national award in 2013. He is the editor of Urban God Talk: Constructing a Hip Hop Spirituality (2013) and his latest book is No Future in this Country: The Prophetic Pessimism of Bishop Henry McNeal Turner which the University Press of Mississippi plans to release in 2020. He is also the curator and director of the Henry McNeal Turner Project (#HMTProject); a digital archive dedicated to the writings and study of Bishop Turner.