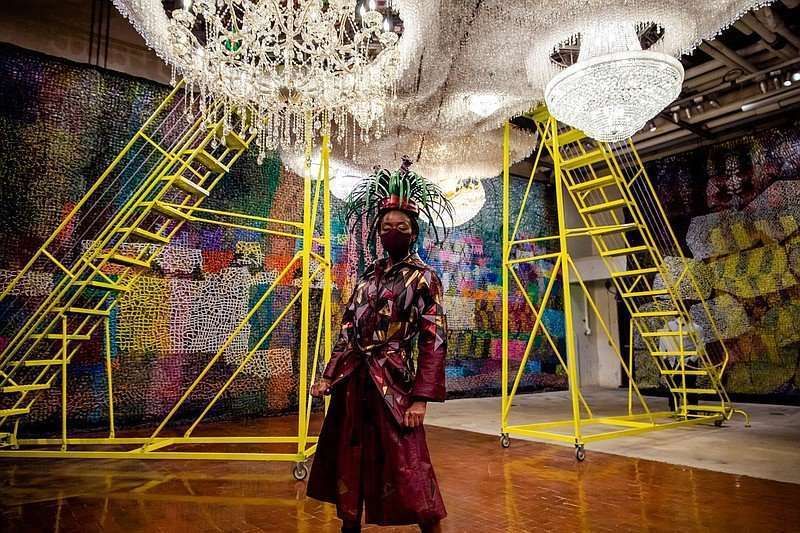 Though both the spring and fall NWA Fashion Week events were canceled this year, the momentum of Northwest Arkansas’ rising status in the industry hasn’t slowed. Since its inception, NWAFW has only grown in attendance, participants, partnerships and community support.

This year, “a lot of time and a lot of talent” went into focusing on the Arkansas Arts & Fashion Forum, the parent entity of NWAFW, explains Robin Atkinson, Fashion Week CEO and creative director and AAFF CEO.

“We're at the very beginning of the cultural snowball that is going to be building in the area.”

AAFF is an organization set on “incubating the arts and fashion in Arkansas” and takes a programmatic approach to teaching transferable skills, supporting designers and expanding entrepreneurial opportunities.

When the special kind of chaos that is covid reached the fashion industry, Atkinson and other organization staff found themselves in the midst of larger national conversations on, specifically, manufacturing, and “Where do we go from here?”

As individual hands, textile manufacturers and even luxury fashion houses pivoted early in the pandemic to meet the need for cloth face masks, AAFF jumped right in as well and organized the creation of some 12,000 face masks to be donated to hospitals and medical clinics. Being plugged into this broader dialogue where “a lot of people are trying to solve the same riddle” — that of determining how to create sewn goods production in the United States, in a financially viable and sustainable manner — got AAFF connected with the Urban Manufacturing Alliance. The alliance, with headquarters in Detroit and New York, is a coalition of organizations focusing specifically on made-in-America sewn goods production.

“So now people know that this is an area that is trying to boot up apparel production, not just the creative stuff, but the actual making of the the garments themselves,” Atkinson says of NWA’s growing network.

The “creative stuff” certainly hasn’t been neglected, though. Particularly this year, the AAFF took big strides toward its goal of increasing educational opportunities around fashion and design in Arkansas, supporting Arkansas-based designers and incubating the fashion industry here.

The first-ever designer residency program in the state, EMERGE, launched in October through AAFF. Despite all the apprehension around the virus, the organization was still able to make actionable progress in the program’s intent to grow local and regional talent through collaboration and mentorship from industry experts.

The mentors also participated in sessions with 10 other cohort designers selected for the program. Just as seemed to happen with the visual and culinary arts before it, those from larger markets who come in to share their knowledge are pleasantly surprised at the community they encounter in the wilds of Arkansas, Atkinson shares proudly.

“Everybody’s always so surprised at the quality of the work coming out of this area and the quality of the designers’ products and the creativity,” she reveals. “Because we’re not as influenced by other markets, so we’re kind of creating our own little fashion oasis in a way.”

And that oasis has a new home as AAFF became the first occupant of the Creative Arkansas Community Hub and Exchange in Springdale, formerly the Arts Center of the Ozarks building. Looking ahead, Atkinson shares the organizations are cautiously, optimistically, planning for the next NWAFW runway show in the summer — outdoors — and that the next two years will be huge for the local fashion industry. “We’re at the very beginning of the cultural snowball that is going to be building in the area,” she promises.

“The thing that this area provides that other areas don’t provide is space and attention and time,” she posits. “AAFF is here just to support fashion designers. That’s what we’re here for. So we get phone calls all the time from people who want a critique on a collection, or who have an idea and they don’t know how to pursue it, or they want to do a collaboration and they want connections to other folks.

“Just that, in and of itself, having organizations that are specifically about fostering local creative production and growth, that doesn’t really exist in every market. That little spark does so much to give people the green light that if you are brave and pursue this idea, someone will help. Someone will have your back.”