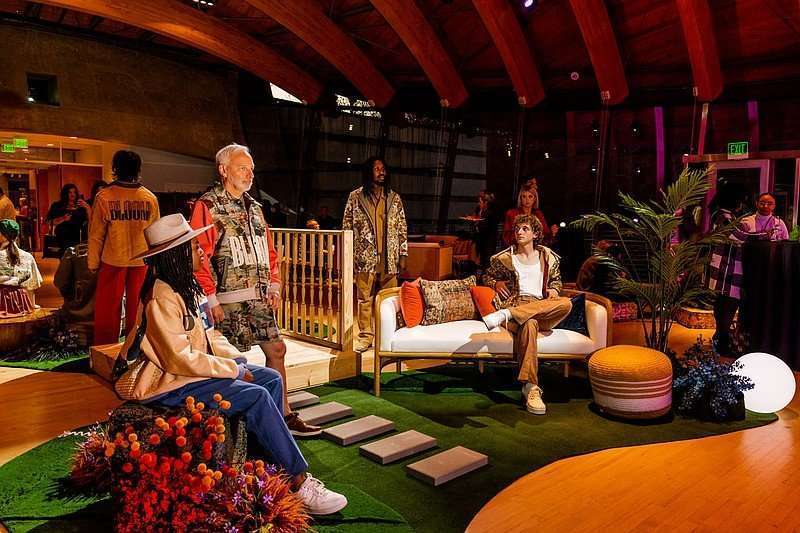 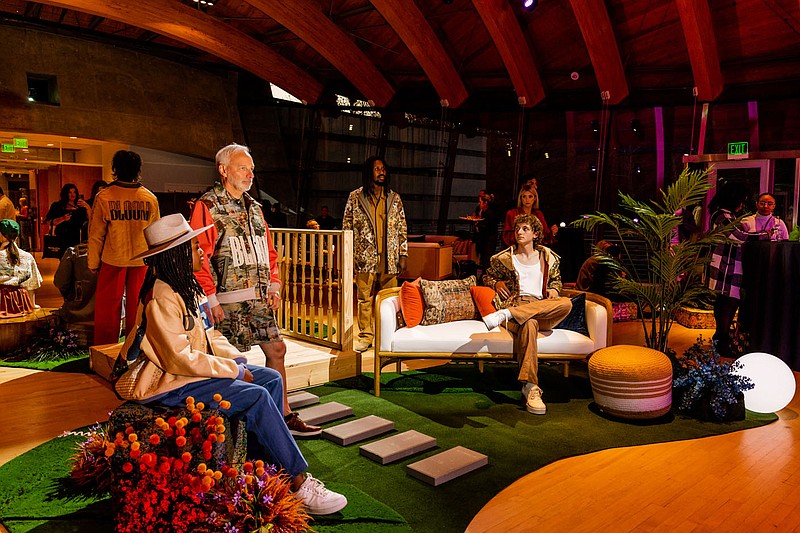 Fashion designers from INTERFORM’s EMERGE Designer Residency program were alongside curators and scholars to discuss social and environmental issues related to fashion and its connections to arts and culture. They came together at NWA Fall Fashion Week’s one-day event at Crystal Bridges Museum of American Art on Nov. 12. (Courtesy Photo)

Chances are, when you think of models on the catwalk, a certain image springs to mind of lines of tall, slender women strutting down and back.

Perhaps many of them are even blonde, white women that easily come to mind. While that’s not an image representative of the entire community, it is a common, stereotypical body type associated with fashion from years of images on television, magazines and other media.

Northwest Arkansas’ Fall Fashion Week challenged that very image with its choice of topics and with representation of all body types, skin colors and genders on its stage. The one-day event of panel discussions and runway shows took place at Crystal Bridges Museum of American Art on Nov. 12.

Speakers that day addressed the changing landscape of clothing choice for genders, diverse cultures’ influence on American fashion, body positivity and neutrality, standards of conventional beauty and how to change them, sustainability in fashion and much more throughout the afternoon, ahead of the runway shows.

If you’ve ever wondered why little boys are traditionally dressed in blue and little girls wear pink, you’re not alone.

Aubrey Costello, a local queer fashion designer and costumer, and Lisa Corrigan, Ph.D., professor of communication and director of the Gender Studies Program at the University of Arkansas, kicked off NWA Fall Fashion Week events with this very topic — first by acknowledging the existence of gender regimes.

Gender regimes are the many ways in which gender affects the way we live, work and interact with others. Corrigan described gender regimes as having structural levels, meaning that there are cultural expectations around gender; as well as institutional levels, causing people to behave in certain gender normative ways in families, church settings or workplaces.

Of course, the ways the two levels intersect are very personal, she said.

“There are different expectations at different historical moments about how bodies are supposed to be costumed in different spaces,” Corrigan said.

In the modern era, gender became a hot topic at about the 1950s, right after World War II. That’s not coincidental, Corrigan said. The result of the war was something scholars refer to as “agency panic.”

“There was a huge push to define something that was gender normal,” she said. “All the psychological literature, business literature, political lit of the post-war period is about what it is to become normal — what are normal behaviors, what are normal bodies, how do we dress to purport ourselves?”

Children’s clothing in particular is a way of mapping anxiety of particular cultures in certain times, Corrigan said. Agency panic was a way of dealing with the trauma of the war and its consequences, and its result was to produce conformity.

Before this moment, children wore the same thing as infants. Boys and girls alike wore white dresses until a certain age.

Costello added that the uniformity of dressing all children in white dresses to a certain age was purely an economical thing, making it cheaper and easier to dress kids.

Once children got to the typical age for colorful clothing, boys were assigned red as a symbol of masculinity and fighting while girls wore light blue or other pastels.

“That flipped mid-century,” Corrigan said. “The fact that it wasn’t always that way tells us that colors and clothing and our expectations of bodies change over time.”

The emergence of other clothing for young children began as luxury items, making it a status symbol to dress them differently, Costello said. It became a major milestone when a boy got his first pair of pants — the ultimate gender assignment of the time.

As Corrigan and Costello talked, a few models arrived on the stage, showing off Costello’s Spring 2023 collection, which they described as Art Nouveau with designs purposefully made not to be constrained to a particular body type. Costello said they are inspired by fashion revivals, particularly late 1960s medievalism.

The ’60s was an exciting time for fashion changes, both say, as the feminism movement gave way to more androgynous looks for women, more pants, suits, etc., and more peacocking for men, in which clothing suddenly was available in many more colors and patterns and more detail oriented than before.

Costello is hopeful that current fashion will continue to move away from the binary and stop conceptualizing androgynous clothing as “masculinity light.” They pointed to Black drag queens of the 21st century laying the groundwork for transgender clothing to ultimately become a recognizable category.

Corrigan noted that the continued existence of anti-trans panic in the U.S. is a dangerous part of the current climate.

“That’s terrifying because that’s really about policing bodies and punishing bodies for the ways that they’re moving through the world,” she said.

Costello agreed, saying the same type of thinking could lead to further alienation of people who are disabled, aging or anyone outside of the narrow definition of “normal.”

What is conventional, western beauty and where did it come from? That’s the question that kicked off a conversation between Sonia Spinx of Walmart Beauty and Jess Whalen, a filmmaker and storyteller, about the markers of beauty silently agreed upon in the worlds of fashion, cosmetics and on-screen.

In Spinx’s mind, it has a lot to do with your upbringing.

“It’s just important to challenge things people tell us, especially when it comes to beauty,” Spinx said. “It’s such a personal, authentic connection with people in the world and things that matter to you … and it’s also a way to make a whole lot of money.”

It starts with what you hear when you’re a child, Spinx said. What your mothers, teachers and other influential people say about your appearance sticks with you and sets the stage for your understanding of what beauty is in your life.

Whalen said she gets a lot of messages about standards of beauty as judged by who makes it onto the big screen. Even if you have strong internal voices touting your unique, personal beauty, that may not be enough to drown out the underlying message in media of what people want to see.

“On the filmmaking, media side, so much of that voice of who’s worthy of being seen or playing the main character in a film, of wearing that look in the commercial or photos in a magazine is a thin, cis gender blonde person, appropriate in gender binary and only dressed a certain way,” she said.

Those messages are reinforced, for example, when larger sizes are not available in stores, or come at a higher price, sending a not-so-subtle message that the buyer may not be as worthy of wearing a certain item, Whalen said.

She urged the audience to think about the way those decisions are made in the larger system, that eventually comes down to people in power. Those who have the money to commission pieces or make choices in marketing for a company have biases that eventually become known as a standard ideal form or look.

Spinx agreed that representation of all kinds is necessary for individuals to feel comfortable, beautiful and worthy no matter what they’re buying or using to influence their appearance.

For example, in a recent decision of photos to market boxes of hair dye for Walmart customers, she noticed that the images of the hair had textures common only for white people. Simply including images of all hair types and textures can make more customers feel as if the product is for them.

“Just the ability to really transform what you look like, to exude how you feel, connects people with you,” Spinx said. “We have a voice to expect the big companies and brands on Instagram to reflect the things that make us feel better and worthy and recognize us for the authentic, beautiful person we want to see in ourselves and others and not just the Kate Mosses of the world.”

INTERFORM’s Model Citizen campaign led up to the Northwest Arkansas Fashion Week Fall 2022. The campaign used its platform to promote civic engagement ahead of the panel discussions and runway shows by highlighting information and opportunities around voter registration and education. (Courtesy Photo)
Speakers at NWAFW addressed the changing landscape of clothing choice for genders, diverse cultures’ influence on American fashion, body positivity and neutrality, standards of conventional beauty and how to change them, sustainability in fashion and much more. (Courtesy Photo)